I have posted before about the social media widget on the JISC homepage.

For a while, I have wanted to get an aggregated feed from JISC Involve as a ‘source’ for the widget and a module on the social media page. JISC Involve is a WordPress blogging platform provided by JISC for the community and there are many active, popular blogs on it by JISC staff or people working for JISC projects and Services. I wanted to raise the profile of these blogs and the JISC Involve platform itself by surfacing some of the content on the JISC website.

It is fairly easy to set up a ‘multi-feed’ using the Site Wide Feed plugin of all posts from Involve but this wasn’t what we wanted. Involve is a blogging service open to anyone with an .ac.uk email address so there are a lot of blogs on there and a great many of them have nothing to do with JISC. We wanted to be able to aggegate specific blogs feeds.

So what we ended up doing was creating a feed aggregator with Yahoo Pipes that would allow us to generate an aggregated feed for selected JISC Involve blogs, where the blog post item links actually contained the name of the blog that the aggregated blog posts were coming from, and that we could then feed into the social media widget.

After trying to achieve this a couple of times (and failing!) Hector asked the JISC community (via Twitter) if anyone knew how to create a Yahoo Pipe that could do this, and he got some great responses from Steve Bonham from Netskills (Twitter, Blog) and from Tony Hirst from the OU (Blog, Twitter).

To get the ball rolling creating our own feed, Hector used the method Steve described and shared with his Yahoo Pipe and created our own Pipe modelled on Steve’s one. 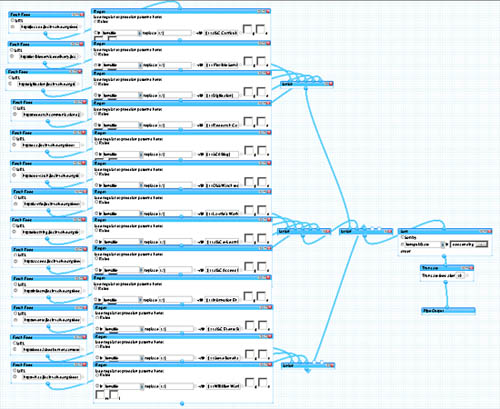 This is working and is now providing a feed which not only has the aggregated blog post titles, but also contains the names of the blogs from which the posts are coming from.

Although this is working and providing the feed we wanted for the social media widget, we’re not sure it is the most efficient method considering how many blogs are currently aggregated (and how many more we will add to it time!), so we’re currently experimenting with the method Tony provided and seeing if this could work for us.

I'm head of web at Jisc. My team manages jisc.ac.uk and other web services. I'm responsible for ensuring the overall user experience of the Jisc web estate is simple, clear and consistent

We use cookies on our website to give you the most relevant experience by remembering your preferences and repeat visits. By clicking “Accept All”, you consent to the use of ALL the cookies. However, you may visit "Cookie Settings" to provide a controlled consent.
Cookie SettingsAccept All
Manage consent

This website uses cookies to improve your experience while you navigate through the website. Out of these, the cookies that are categorized as necessary are stored on your browser as they are essential for the working of basic functionalities of the website. We also use third-party cookies that help us analyze and understand how you use this website. These cookies will be stored in your browser only with your consent. You also have the option to opt-out of these cookies. But opting out of some of these cookies may affect your browsing experience.
Necessary Always Enabled
Necessary cookies are absolutely essential for the website to function properly. This category only includes cookies that ensures basic functionalities and security features of the website. These cookies do not store any personal information.
Non-necessary
Any cookies that may not be particularly necessary for the website to function and is used specifically to collect user personal data via analytics, ads, other embedded contents are termed as non-necessary cookies. It is mandatory to procure user consent prior to running these cookies on your website.
SAVE & ACCEPT