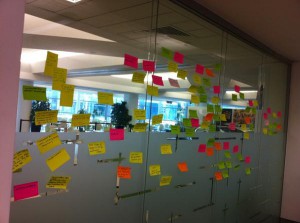 Last week was IWMW and David Cornforth and I presented a workshop session on content strategy (resources and slides here). We asked attendees to write up their content problems on post-its and stick them on the ‘issues wall’. We filled it.

The positives – we all get that content is important, critical. Otherwise our session wouldn’t have been full. But all those issues? Also, oddly, positive. We recognise where things aren’t working. The biggest problem? Getting everyone else to see it too.

An earlier session on governance was full of talk of beleaguered editorial staff hoping for a silver bullet. Surely someone has a cast iron governance document that has somehow stopped the random requests to “just add this to the web”. The new content, pages or even sites insisted upon without considering the integrity of the rest of the site. Ignoring user testing or good practice for the sake of just getting it done.

The consensus seemed to be it wasn’t out there. That a governance document signed off at the highest level may stand for a short while. That editors out in the faculties may do the right thing for the first few weeks after their training. But that lasts until someone higher up or with a louder voice has an idea.

The truth is even with the paperwork we’re still constantly having to cajole, prod, persuade and sometimes outright argue, and partly this is down to the area in which we work.

Don’t worry – you can just put that live

Unfortunately – not everyone believes it.

We have expertise that sometimes feel transparent. When we look at content we’re trying to juggle user need, organisational need, brand, tone, style and strategy. We don’t just look at a page, we’re considering the user journey, the context of the user, the integrity of the rest of the site, all while trying to identify and solve the problem the content is trying to answer.

Listening to how heartfelt the issues were in our session we don’t just see the importance of the user experience – we feel it.

Later Richard Prowse said something that chimed with comments from our session. That when content people get together it almost feels like a therapy session. A common refrain from participants was it felt so good to know it wasn’t just them – that other people were struggling with the same problems.

Change is possible and coming

It’s not great that Higher Education, with all the challenges it’s facing, still seems to have a problem with trusting their experts to do the right thing. That, in one example, a VC can ring up a web manager and insist a link be added to the homepage based on a passing remark from a friend.

That is the situation – but it will change. Outside the sector it’s already changing. Private finance put huge weight behind their content strategy (but when each of your users is worth a few million pounds it’s perhaps easier to remain focused). And when government can do it – despite the characterisation of being sclerotic, risk averse, sprawling, fragmented and ego filled – there has to be hope for universities.

HE will get there eventually. They’ll have to.

One quote from Paul Boag’s talk which should have terrified everyone in the room (he has a gift for those) was the digital experience you create isn’t competing with that of your peers. That students have come to expect services such as those from Facebook and Google for free. If their £9k experience isn’t close there’s a problem.

And traditional reputation will only get you so far. We heard of a large top 10 university talking of how they expect online and distance learning to become an important part of their future. They also admitted that their brand has much less of a draw online, and that differentiation will come from user experience.

So we have an idea how to make content work – but keep hitting barriers. We can keep talking about what the user wants, but the feedback from the conference was that doesn’t cut it with the people we need to listen.

We can try putting the user in front of them. Through data, through evidence, and perhaps it will eventually sink in.

I still think getting your senior staff to sit in on user testing would be hugely helpful. It’s hard to keep arguing when you’re watching a user struggle with your site, completely ignore your prize content, or describe their suggestions for navigation as meaningless.

What if you can’t get the VC in on the testing? We can (and should) change our emphasis.
For those who respect it – we need to start bringing data. Data of what’s wrong, data of what’s working.

And for everyone else?

From Ross Ferguson and Paul Boag we heard that we need to start using language managers understand, risk and cost.

I also think we need to start talking problems. We keep hoping people will start to bring us problems rather than solutions, but they don’t. By the time someone has come to us with one of those solutions they’ve probably moved on to worrying about the next thing. The people coming to us are probably weighed down by a mountain of problems. If we can get to them first – book in time to see what’s coming and how we can help – perhaps they’ll be more receptive to working with us.

And where that doesn’t work? While the importance of the user and creating a coherent experience for them is still a nice to have? Perhaps we should take Richard Prowse’s advice. Relax a little. We see every time we’re overruled as a failure. It’s not a coincidence one participant said talking to other content strategists was a bit like going to AA.

We should keep up the good fight, but have the wisdom to know what we can’t change. Yet. 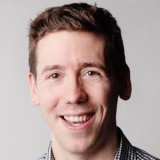 First Motion Products offers an unmatched inventory of commercial truck part products. Our strength is the ability to service “truck down” and rush shipments. We can fill those requests for the every-day parts or hard-to-find parts. We specialize in Flywheels, Flywheel Ring Gears, Flywheel Housings, Oil Pans, and Clutch Accessories for truck applications. Located in Bourbon, MO.

We use cookies on our website to give you the most relevant experience by remembering your preferences and repeat visits. By clicking “Accept”, you consent to the use of ALL the cookies.
Cookie settingsACCEPT
Manage consent

This website uses cookies to improve your experience while you navigate through the website. Out of these, the cookies that are categorized as necessary are stored on your browser as they are essential for the working of basic functionalities of the website. We also use third-party cookies that help us analyze and understand how you use this website. These cookies will be stored in your browser only with your consent. You also have the option to opt-out of these cookies. But opting out of some of these cookies may affect your browsing experience.
Necessary Always Enabled

Any cookies that may not be particularly necessary for the website to function and is used specifically to collect user personal data via analytics, ads, other embedded contents are termed as non-necessary cookies. It is mandatory to procure user consent prior to running these cookies on your website.